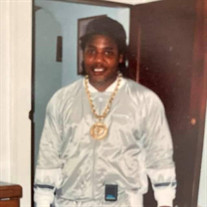 Mr. Adrain "Big A" Robinson Sr, 57, of Peoria, IL transitioned into his heavenly home at 1:26am, Thursday, January 13, 2022, in Leesburg, FL. Adrain was born July 29,1964, in Milwaukee, WI to Emily Robinson and Elmore Marks. They preceded him in death. Adrain was educated in the Peoria Public School system. He attended Trewyn Middle School and Manual High School. Adrain later worked for Haggerty Steel as a machinist. Adrain was a natural protector who didn't ask for much in return. He was so charismatic, ambitious, humble, and passionate. As man of his word, he would give you the shirt off his back. His favorite response was always "I'm on my way." If you knew him, you knew what that phrase meant. Adrain loved spending quality with his family and friends. Even in his time away, he always found a way to support his family. He enjoyed watching, conversing about basketball & football, especially Tom Brady, life lessons, cooking, and cars. Although he didn’t showcase his skills often, he was an excellent basketball player. If Adrain knew he excelled at something he would be sure to make it known. His confidence was unmatched. Adrain was the best at everything he did and his legacy will live on forever. Adrain leaves to cherish his precious memories two sisters: Renada (Wendell) Allen and Margo Robinson. Seven sons: Anthony Davis, Adrain Robinson Jr, A'Darian Wellman, DaQuan Knox, Avory Robinson, Zachariah Roberts, Jerell Langford and Honorary son Greg Davis. Eight daughters: La'Keshia Alexander, Mykesha Robinson, Aundria Robinson, Ava Robinson, Shanwa Williams, Sharell Langford, Elexus Faulkner and Shavon Bolden, 29 grandchildren and a host of nieces and nephews who are going to miss him dearly. Adrain was preceded in death by his lovely mother Emily Robinson and his father Elmore Marks. He was also preceded in death by his grandmother, Ruby Robinson and a host of aunts and uncles. Adrain has left a legacy that will live on from generation to generation. Through everything he kept his faith and finished his work here on earth. Now he can peacefully rest from his early labor. A visitation will commence at 10:00 AM at T.W. Parks Colonial Chapel. Interment will take place at St. Mary's Cemetery. Online condolences and acknowledgements can be made to twparkschapel.com. Due to COVID-19 mandates both masks and social distancing are mandated.

Mr. Adrain "Big A" Robinson Sr, 57, of Peoria, IL transitioned into his heavenly home at 1:26am, Thursday, January 13, 2022, in Leesburg, FL. Adrain was born July 29,1964, in Milwaukee, WI to Emily Robinson and Elmore Marks. They preceded him... View Obituary & Service Information

The family of Mr. Adrian Robinson created this Life Tributes page to make it easy to share your memories.

Send flowers to the Robinson family.