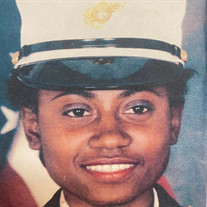 Angennette Alexander 52, of Peoria passed away on Wednesday, January 13, 2021 at 2:55 a.m. She was born May 9, 1968 in Peoria, Illinois to Ada Jackson and Lathamen Alexander. Angennette was a loving, caring person who would do anything for anyone. She was full of joy and had so much life left in her. She enjoyed music and playing with her grandchildren. She was employed at Sharon Healthcare Woods for 22 years as a Housekeeper Supervisor and program director. She was also a veteran of the United States Marine Corps for eight years. Angennette was a proud member of the Church of the Living God of Peoria. In addition, she leaves to survive her father, Lathamen Alexander, two daughters: Shynece Alexander and Ashantay Alexander, all of Peoria, Illinois. She leaves three grandchildren, Zyerah Alexander-Burks, Zyonna Alexander–Burks, and Zaybair Alexander Burks, all of Peoria, Illinois. She leaves behind one grand-dog, Winter Blue Alexander, one Godson, Rashad Diaz of Peoria, IL and seven sisters: Sue (Howard) Nathan, Jennell Herron, Lee Lee Williams, Elaine (Bobby) Jones, Linda Jones, Chantay (Corey) Gray, Vicki (Randy) Wyatt; four brothers: Curtis Jackson, Erne Jackson, James (Lisa) Alexander, Leroy (Salmena) Smith, Jr.; one uncle, Fred Hogan; one aunt, Corine Sutton and a bunch of nieces and nephews; one special brother/cousin Gregory Hines. She was preceded in death by her mother Ada Jackson, two brothers, Charlie Williams, Jr. and Willie James Herron, one aunt, Emma Williams and her fiancé Tyrone Lewis. A Private Homegoing Service will be held Saturday, January 23, 2021 at T.W. Parks Colonial Chapel at 11:00 a.m. with a public drive-up visitation commencing one-hour prior at 10:00 a.m. Bishop Leroy Smith Jr. will officiate. Military Honors will be presented. Due to COVID-19 mandates social distancing and masks are required. Interment is private.

Angennette Alexander 52, of Peoria passed away on Wednesday, January 13, 2021 at 2:55 a.m. She was born May 9, 1968 in Peoria, Illinois to Ada Jackson and Lathamen Alexander. Angennette was a loving, caring person who would do anything... View Obituary & Service Information

The family of Ms. Angennette A. Alexander created this Life Tributes page to make it easy to share your memories.

Angennette Alexander 52, of Peoria passed away on Wednesday,
January...