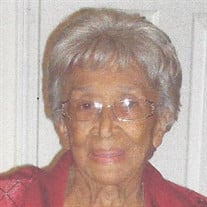 Annette M. Moss 97, of Peoria answered God’s call on Tues., November 17, 2015 at Unity Point Proctor at 3:32 a.m. She was born October 27, 1918 in Louisiana, Mo.to the late Esque Watts and the late Ethel Clark-Watts. She married her soul mate the late James E. Moss Sr. Annette was an integral part of Ward Chapel AME Church in Peoria, IL for more than 40 years. At the time of her transition, Annette was a devoted and faithful member. She loved her church family, Annette also loved to work with the mentally challenged, and she was an avid reader and crossword puzzle solver. Annette was a prayer warrior and loved serving the Lord. She retired from Saint Francis Hospital after nineteen years, in which she became a Central Supply supervisor. In addition, she volunteered at Robert A. Jamieson School for more than 21 years working with mentally challenged people. For over 50 years, she was dedicated to serving and embracing the mentally challenged throughout her life. She leaves to cherish her loving memories: daughters, Renee Moss and Elonda Whitfield both of Peoria, IL. 2 grandchildren; Elaine Burkett and Jala Moss both of Peoria. 2 great-grandchildren. Along with a host of other family members and friends who will miss her dearly. One son, sister, and two grandchildren preceded her in death. Homegoing celebration will be held at 11 a.m. on Monday November 23,2015 with visitation commencing one hour prior at 10:00 a.m. at Ward Chapel Ame Pastor Elaine Gordon will officiate. Interment will be at Lutheran Cemetery. Services were arranged with care in loving memory especially for Annette’s family and professionally directed by T.W. Parks Colonial Chapel. Online condolences or words of encouragement can be made at www.twparkschapel.com.

The family of Annette M Moss created this Life Tributes page to make it easy to share your memories.

Send flowers to the Moss family.