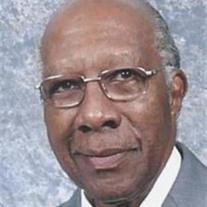 Overseer Arlander Rutherford 82, of Peoria passed away Friday October 26, 2012 at 6:30 p.m. at Kindred Hospital. He was born October 23, 1930 in Blue Mountain MS to Hubert and Martha Talley Rutherford. He married Mother Martha C. Hickenbottom on July 9, 1949 in Ripley, MS. They were married for 55 yrs. She precedes him in death. In the union 3 children Hubert Rutherford, Shelia Lee of Peoria, and Angela Rutherford of Lincoln IL, the survive. 1 son preceded him in death. He raised 5 grandchildren Charmane (Steven) Russell, Janette Sims, Jemarreo (Tiffany) Rutherford of Peoria, Shalanda (Jarvis) Raynor of Fredericksburg, VA, 8 grandchildren, 22 great grandchildren, 2 great great grandchildren and a host of nieces and nephews. On June 2, 2007 he married Pastor Florine Williams she survives. In this union he gained 5 step children Mary Boyd, Jason (Lisa) Taylor, Dwayne and Kenneth Williams, and Sharon (Mitchell) Colemen all of Peoria they survive. 1 brother Elder Liehue (Ruth) Rutherford of Peoria, 2 sisters Annie Lee Smith of Peoria, and Martha Grace Bradford of E. Chicago, IN. He is preceded in death by 3 sisters and 1 brother. He worked at Armour Packing House and Peoria Malibu for many yrs. He went to Caterpillar in 1975 working 27 yrs. and retiring in 2002. He became pastor of the Glorious Church of Jesus Christ in 1972. He became overseer of the Apostolic Missionary Church in 1987. He believed in praising God with all he had in him. He loved cooking, fishing, gardening, outdoors, and all living creatures. He was a devoted husband, father, grandfather and Pastor to his family and loved everyone who knew him. Services will be held Saturday November 3, 2012 at 10:00 a.m. with visitation commencing one hour prior at 9:00 a.m. at the Pentecostal Church of Jesus Christ. Pastor Henry Bolden Jr. will officiate, Bishop Azel Colston Jr. the Eulogist. The family has chosen T.W. Parks Colonial Chapel to handle the final arrangements of their love one. Online condolences can be made at www.twparkschapel.com

The family of Overseer Arlander Rutherford created this Life Tributes page to make it easy to share your memories.

Send flowers to the Rutherford family.