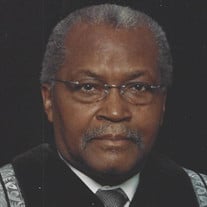 Pastor Arthur J. Guyton Sr., 78, of Peoria passed away from this life unto another at 11:15 a.m. Monday, Jan. 12, 2015, at his residence. Pastor A.J. Guyton was born on April 8, 1936, in Blytheville, Ark., to the late Marshell and Fannie (Clark) Guyton. He was married to his soulmate, Lena (Ferguson) Guyton, for 58 years. She survives. Pastor Guyton attended school in Blytheville, Ark. He graduated from Theological Seminary in Decatur, Ill., and branch extension out of Monroe, La., where he received several degrees. He retired from Caterpillar Tractor Co. after 34 years in Morton, Ill. Pastor Guyton loved helping people, family gatherings and cooking. He served in the jail ministry for 40 years. He was the pastor and founder of Trinity MB Church for 16 years, until his health failed. Pastor Guyton held many positions with the Baptist Ministerial Alliance. He served on the PHA board and many, many other boards. He will be tremendously missed by his family and friends. He leaves to cherish his precious memories his wife, Lena Guyton of Peoria; three sons, Arthur (Georgetta) Guyton Jr., Carey L. Guyton and Stephen D. (Denise) Guyton; three daughters, Margaret J. Guyton, Marnette Riley and Lori T. (Pastor Harold) Dawson Jr., all of Peoria; four brothers, Johnny (Lois) Guyton, Willie (Willie B.) Guyton, Dave (Emma) Guyton and Thurmond Guyton, all of Peoria; six sisters, Bernice Wilkerson of Peoria,Verlean Johnson of Fort Lauderdale, Fla., Bobbie Posey of Philadelphia, Pa., and Pauline Dodson, Mary Logan and Thedosia Guyton, all of Blytheville, Ark.; 21 grandchildren; 29 great-grandchildren; one great-great-grandchild; and five godchildren; along with a host of nieces, nephews, cousins and dear friends who adored him and will miss him dearly. He was preceded in death by his parents, three brothers and four sisters. A wake visitation will be held on Friday, Jan. 16, 2015, from 5 to 8 p.m. at Trinity Baptist Church, located at 1418 South Faraday Ave. A Heaven-bound life service will be held at 10 a.m. on Saturday, Jan. 17, 2015, at St. Paul Baptist Church, with visitation commencing one hour prior at 9 a.m. Pastor Deveraux Hubbard will officiate. Pastor Guyton will be laid to rest in Parkview Cemetery. Arrangements were made especially for the Rev. Guyton's family and professionally directed by T.W. Parks Colonial Chapel. Online condolences or words of encouragement can be made at www.twparkschapel.com.

The family of Rev. Arthur J. Guyton Sr. created this Life Tributes page to make it easy to share your memories.

Pastor Arthur J. Guyton Sr., 78, of Peoria passed away from this...

Send flowers to the Guyton family.