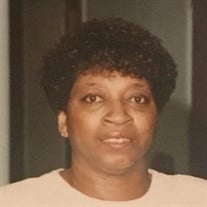 Bernice Anderson Dawson was born on February 28, 1943 in Phillips County, Arkansas to Willie C. Anderson, Sr. and Earnice Hardaway Anderson. She was the first born of four children. She confessed her belief in Christ at an early age and attended church in the Midland Heights community. Bernice attended Eliza Miller High School and was a 1961 graduate. After graduation, Bernice moved to Chicago, Illinois and studied business at Kennedy-King College while living with family. In 1968 she met and married Wadell Dawson and into this union a daughter and son were born. Bernice began her career in telecommunications working for Illinois Bell and continued through several organization changes to include Ameritech/SBC and AT&T. She was dedicated throughout these changes that led her to her final supervisory position with AT&T. Bernice retired in 2014 to enjoy her life with family and friends. One of Bernice’s greatest joys was her membership in the Improved Benevolent Protective Order Elks of the World. She began this lifelong journey with Nora Field Taylor #270 and later joined SoJourner Truth Temple #1369 in 1990 as a chartered member. She would serve as Daughter, Financial Secretary and Treasurer. She belonged to the Nell M. Roberts Past Daughter Rulers Council where she served as Financial Secretary. She was a member of the Antlered Guard Department of Elks and served as Company Clerk. As a member of the Illinois/Wisconsin State Association, she was a Past State President and served as Trustee and Head Marshal. On the national level, Bernice was a Past Grand Daughter Ruler, the highest honor in Elkdom. On this level she served with passion with the Beauty and Talent Department. Daughter Dawson also belonged to the Civil Liberties Department where she served Sgt of Arms. Bernice departed this earthly life at 3:20 p.m. on Sunday, March 12, 2017 at Heartland Manor Care in Peoria, Illinois. She is preceded in death by father and mother, Willie C. Anderson, Sr. and Earnice Hardaway Anderson. She leaves to cherish her memory a daughter, Danielle Grace and son, Derrick Wadell; one step-son, Matthew Preston Barrion; three siblings, Willie C. Anderson, Jr. of Minneapolis, Minnesota; Wallace Anderson (Eula) of Chicago, Illinois; and Sandra A. Williams (Foster, Jr.) of Nashville, Tennessee; 17 grandchildren, six great grandchildren, and a host of nieces, nephews, cousins and devoted loving friends that included Thomas L. Morris, with whom she shared a thirty year relationship. There will be a Visitation Friday March 17, 2017 from 7 to 8pm at T.W. Parks Colonial Chapel. Services will be held on Saturday March 18, 2017 at at 11:00a.m, with visitation one hour prior at Mt. Olive Community Church where Pastor Chuck Brown will serve as host Pastor. Rev.Kim Hayes will officiate.

Bernice Anderson Dawson was born on February 28, 1943 in Phillips County, Arkansas to Willie C. Anderson, Sr. and Earnice Hardaway Anderson. She was the first born of four children. She confessed her belief in Christ at an early age and attended... View Obituary & Service Information

The family of Bernice Anderson Dawson created this Life Tributes page to make it easy to share your memories.

Bernice Anderson Dawson was born on February 28, 1943 in Phillips...