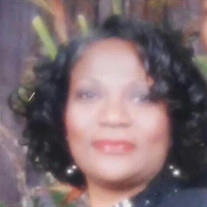 Blanchea R. McDaniel, 66, formerly of Peoria, passed away departing this life to live on in Glory, at 6:34 p.m. on Thursday, Jan. 29, 2015 at Beaumond Hospital in Royal Oak, MI. She was born on Oct 20, 1948 in Cleveland, Miss., to the late David Robinson and Ruby Thomas. She had a blissful married to her soulmate Leon McDaniel for 30 years. He survives. Blanchea accepted Christ in her life a young age, and firmly believed in the laws of the Lord. She was a member of New Hope Missionary Baptist Church in Southfield, MI. In 1986, the couple moved to Southfield, MI. This was also the year Blanchea decided to step out on faith and start her own business. Always having a love for children she opened Childcare at Blanchea's Place. She would take the children in as young as 6 months, and keep them until they were ready to start kindergarten. As the children grew and moved on, some would often return to just say hi to their "Blanchie Boo” or “Granny". One of her children even returned as employee. Blanchea officially retired in 2010. She leaves behind to be cherished her loving husband, Leon McKay McDaniel; her mother, Ms. Ruby Robinson; her daughter, Portia (Eric) Bitson; two step-sons, Elton (Tabatha)Eaton, and Rory McDaniel; three sisters, Hattie Lee Cockroft, Juanita Duncan, and Geneva Robinson; one brother, William Earl Robinson, and nine grandchildren; Darius, Kendall, Anthony, Essence, Kayla, Bonnie-Rae, David, and Adaya. She also leaves behind a host of nephews, nieces, cousins, and friends. Blanchea was preceded in death by her father David Robinson, Sr., two brothers, Augusta (Micky) Robinson, David (Champ) Robinson, Jr., two sisters, Ethel Lee Robinson, Emily Robinson, and one granddaughter, Breanna Nicole Bitson. Homegoing service will be held at 11 a.m. on Monday, Jan. 9, 2015, at Bethel United Methodist Church , with visitation commencing one hour prior at 10 a.m. Pastor Gary Wilson will officiate. Blanchea will be laid to rest in Lutheran Cemetery. Arrangements were made especially for Blanchea’s family and professionally directed by T.W. Parks Colonial Chapel. Online condolences or words of encouragement can be made at www.twparkschapel.com.

The family of Mrs Blanchea McDaniel created this Life Tributes page to make it easy to share your memories.

Send flowers to the McDaniel family.