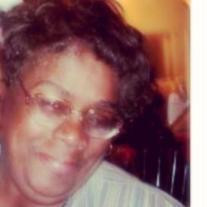 Carol Ann White 62 of Peoria passed away Sunday December 2, 2012 at 12:49 p.m. at her residence. She was born December 3, 1949 in Peoria IL, to Roy Johnson and Anna Mae Jones- Johnson who preceded her in death. She married Daniel White June 20, 1970. He survives. She was a member of Bethel United Methodist Church she knew and loved Jesus Christ as her personal savior, loved spending time with her family and grandchildren. Carol worked at High View Nursing Home until 1976. She was a devoted Homemaker to her family. She returned back to the work force as a home care giver until her death. In addition to her husband she leaves to cherish her precious memories: to her 2 sons: Timothy and Christopher (Imelda) White of Peoria, her grandchildren Jordan, Raquel, Christian, Amalia and Christopher Jr., and her brothers and sisters who she loved dearly she is survived by: 3 brothers: Mr. William D. Johnson of Chicago Il, Mr. Howard Johnson and Steven (Monica) Johnson of Peoria Il, 5 sisters: Ms. Francis H. Johnson, Mrs. Roberta (Sylvester) Gordon, Ms. Linda S. Johnson, Ms. Leslie Winters, and Ms. Sandra D. Johnson all of Peoria IL, and Linda Stenson of New York, N.Y., 2 special nieces: Mrs. Diane Knox-Fleming and Denise M. Sain, and a host of nieces and nephews. Carol is also survived by a very special sister in-law Dixie Johnson of Colorado Springs CO, and Ruth Brooks of Peoria IL. In addition to her parents she was preceded in death by a sister: Dora Mae Brown, 2 brothers: Thomas Johnson and Walter Johnson. Services will be held Saturday December 8, 2012 at 10:00 a.m. with visitation commencing one hour prior at 9:00 a.m. at T.W. Parks Colonial Chapel. Pastor Richard K. Hammonds. The family has chosen T.W.Parks Colonial chapel to handle the final arrangements of their love one. Online condolences can be made at www.twparkschapel.com

Carol Ann White 62 of Peoria passed away Sunday December 2, 2012 at 12:49 p.m. at her residence. She was born December 3, 1949 in Peoria IL, to Roy Johnson and Anna Mae Jones- Johnson who preceded her in death. She married Daniel White June... View Obituary & Service Information

The family of Carol Ann White created this Life Tributes page to make it easy to share your memories.

Send flowers to the White family.