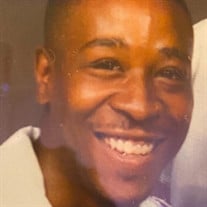 Charley Wilson Jr, 54, of Peoria Illinois, passed away February 9th, 2021 at Saint Francis Hospital. He was born November 23rd 1966, in Chicago Illinois to Vivian (Brown) Wilson and Charley Wilson Sr. Charley was the youngest of nine siblings who affectionately called him Junior. Charley leaves to cherish his precious memories his mother, Vivian Wilson of Peoria Illinois; (2) daughters: Sortell Peters and Correa Wilson, and (1) son Cornelius Wilson, all of Peoria, Illinois. He had five siblings, including (3) sisters: Lolita Brown, Vanessa Brown, and Valina Brown and (2) brothers: Claude (Tamra) Brown and Ray Anthony Brown Sr. all of Peoria, Illinois. He also leaves to treasure his memories (8) precious grandchildren and a host of nieces, nephews, cousins, and friends. An honorable mention to his dear close friend, Desmond Redden Sr. Charley ‘Junior’ was known as an avid music collector, especially old school grooves. He could commonly be seen anywhere with his headphones on and bopping to the music. In his youth he was widely known for his handles on the court. For those of you that don’t know, that means ‘BASKETBALL’. Junior could sing, loved to cook and going to visit his Mother, affectionately known as Mommy. Charley was last employed at St. Francis Medical Center, doing what he loves, COOKING. He leaves this earth to meet with his loved ones that preceded him in death; his father, Charley Wilson Sr., his sister and best friend Gertrude Wilson, niece Vivian Brown, brother David (Sal) Brown Sr., and his loving, big hearted sister, with whom he was remarkably close, Patricia Brown. A Visitation service will be held Friday, February 19, 2021 at T.W. Parks Colonial Chapel from 12:00 p.m. to 1:00 p.m. Due to COVID-19 mandates mask and social distancing are required. Charley will be entombed at Parkview Mausoleum.

The family of Mr. Charley Wilson Jr. created this Life Tributes page to make it easy to share your memories.

Send flowers to the Wilson family.