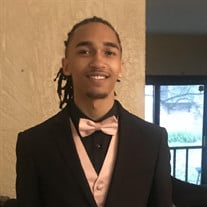 Christopher M. Hodge Jr., 19, of Rockford departed this life Monday, February 22, 2021 at 9:10 p.m. He was born on August 29, 2001 in Peoria to Christopher M. Hodge Sr. and Staci Williams, they survive. He was raised by his mother and step father Mr. and Mrs. Reginald and Staci Williams in the city of Rockford, Il where he resided until his departure. Christopher attended Peoria Central Highschool; however, he graduated from East Highschool in Rockford, IL. where he earned a full scholarship through the Pathways teaching program and a basketball scholarship to attend Rockford University. He declined the basketball scholarship to put his focus on school and a full-time job in order to help support his beloved family. He was studying to obtain a bachelor's degree in education. Christopher had a passion for mentoring and educating youth in his community. He recently accepted an internship to teach at Kennedy Elementary School in Rockford, IL. He was extremely excited about the opportunity to begin his career. Christopher always had an entrepreneurial spirit and was also working on his own clothing line. He had experience working in clothing and sales since the age of 13. Christopher loved basketball and had plans to become a coach in addition to teaching. He was an avid supporter of his younger brothers' gifts and talents. Most of all, he loved watching and supporting his brother Bryson dominate on the court and Keith become a young and published author. In addition to his loving parents Christopher leaves to cherish his precious memory: four brothers; Bryson Hodge of Rockford, Nickolas Hodge of Wilson, NC, Keith long of Rockford, and Michael Hodge of Peoria; four sisters; McKenzie Williams and Kiarra Williams both of Peoria, Chloe Hodge and Alivia Hodge both of Peoria; Paternal grandparent: Juanita Hodge of Peoria; Maternal grandparents: Daniel and Johnnie Mae Curtis of Peoria; Uncles: Donnell Mitchell and Richard Fesby of Chicago, LaMichael (Sarah) Joseph of Milwaukee, WI; Aunts : Shameka Hart of Rockford, Melissa (Jerome) Mitchell of Milwaukee, Tiffany Harper of Texas, Monique (Timothy) Mitchell of Chicago, Caprisha Joseph of Texas; God mother and Aunt: Rachel Williams of Maywood; girlfriend: Tamir Jackson of Rockford, IL; and a host of other family and friends whom will miss him dearly. Christopher was preceded in death by: one sister: Desire Jones and Paternal Grandfather: Ernest Hodge A private Celebration of Life service will be held for Christopher on Tuesday, March 2, 2021 at Faith Tabernacle C.O.G.I.C. at 12:00p.m. with visitation commencing one-hour prior at 11:00 a.m. Elder Felton Beck Jr. will officiate. Due to COVID-19 masks and social distancing are required. Christopher will be laid to rest at Parkview cemetery.

Christopher M. Hodge Jr., 19, of Rockford departed this life Monday, February 22, 2021 at 9:10 p.m. He was born on August 29, 2001 in Peoria to Christopher M. Hodge Sr. and Staci Williams, they survive. He was raised by his mother and step father... View Obituary & Service Information

The family of Christopher M. Hodge Jr. created this Life Tributes page to make it easy to share your memories.

Send flowers to the Hodge family.