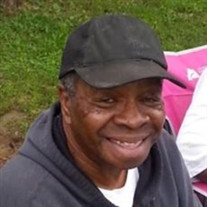 Clarence Hobbs, 77, departed this life on April 13, 2022, at Unity Point Methodist. He was born June 12, 1944, to the late David Hobbs and Fannie Mae (Washington) Hobbs in Scott, Mississippi. He accepted Christ and was a true believer of God's Holy Word. He was baptized by his good friend Pastor Randy and was a member of New Boston Baptist Church of New Boston, IL for many years. On April 6, 1969, he married Josephine Cannon, his soulmate and love of his life. Clarence was a retired semi-truck driver. Some of his hobbies that he absolutely loved were collecting guns, hunting, and fishing. He could put a hurting on any body of water that he threw a fishing pole in. However, his greatest joy was spending time with his family and having family cookouts. His famous sayings were "you can catch a fish if you hold yo mouth right" and "it's gon' cost you $5." Clarence leaves to cherish his memory one daughter Patricia Davis of Peoria, IL; two sons, Larry Sullivan of Louisville, KY and Willie Davis of Canton, IL; one brother John Henry (Kim) Washington of Peoria, IL, and one sister Jessie Mae (Rommel) Evans of Kenosha, WI,; his caregivers Tiffany (Kenzo) Irby, Tamica (Robert) Davis- Williams, and Courtland (Tiffany) Davis,; 13 grandchildren, 27 great grandchildren, 11 great great grandchildren,; a host of nieces, nephews, cousins, and friends who adored him and will miss him dearly. He was preceded in death by his lovely wife Josephine Hobbs, his parents, two brothers, three daughters, one son, six grandchildren, two great grandchildren, one great-great granddaughter. A home-going celebration will be at 10 a.m. Saturday, April 30, 2022, at T.W. Parks Colonial Chapel with visitation commencing one hour prior at 9 a.m. Pastor Greg Washington will officiate. Interment will be in Parkview Cemetery. Arrangements were made especially for Clarence’s family and professionally directed by T.W. Parks Colonial Chapel. At the request of the Hayes family, Live Streaming Service be available on T.W. Parks Colonial Chapel’s Facebook page at https://www.facebook.com/twparkscolonialchapel/. Online condolences and acknowledgments will be made at twparkschapel.com. Due to Covid-19, both mask and social distancing are mandated.

Clarence Hobbs, 77, departed this life on April 13, 2022, at Unity Point Methodist. He was born June 12, 1944, to the late David Hobbs and Fannie Mae (Washington) Hobbs in Scott, Mississippi. He accepted Christ and was a true believer of God's... View Obituary & Service Information

The family of Mr. Clarence Hobbs created this Life Tributes page to make it easy to share your memories.

Send flowers to the Hobbs family.