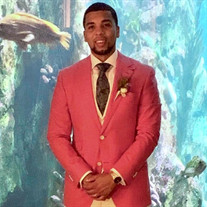 Darious A. Lockett, 30, of Peoria, and a lifelong resident of Chicago passed away in Marshall County, in Gods precious hands, on September 16, 2019 at 7:37 a.m. He was born March 12, 1989 in Chicago, IL to David and Clydell Lockett Sr,. As a young lad Darious was a very humorous. The most memorable moment of displaying his humor was when he left his parents in “awe” when he painted their house red. Darious was the 5th child out of 8 siblings and was truly loved by them all in childhood to adulthood. He was their rock and father figure at times. He dedicated his life to the Lord at a young age. Darious attended New St. John Community MB Church where he served on the Usher Board. Darious was a very intelligent and family oriented young man. He had a good heart and was always helping others. He had a pleasant personality and a comedic sense of humor. He lived his life to the fullest by traveling, trying different vegan deliquescies, attending sporting events, concerts, vehicle shopping, and spending quality time with family and friends. He loved to shop and had an impeccable sense of style and never followed the trend of the crowd. Darious was always a leader He was an advocate for financial literacy...always teaching others the importance of savings, investing, building good credit, and obtaining life insurance. He was an advocate for financial literacy...always teaching He obtained a degree in Mortuary Science from Malcolm X College under the leadership of Karen Scott whom was his mentor. Darious started his career as an apprentice at A.R. Leak and Sons Funeral Home and was a part of the 100 Black Men of Funeral Service Through his Apprenticeship under the guidance of Geraldine Mosley-McCall he met the loves of his life his Wife Sharee Tucker- Lockett and Son Josiah Tucker-Lockett. He married Sharee Tucker Oct. 24th 2017. Both in jubilee celebrated the wedding ceremony in Seattle with family and friends on August 18th 2019. He continued his career at Leak and Sons as a mortician mentoring others in the profession, especially young African American males. He had a vision for more young males such as his self to be passionate in the field of Mortuary Science as he was. He was a believer in working together to create a network of businesses and started a Security business. He, along with his spouse also owned an Independent Funeral Service Divinity Mortuary. At a young age, he had a vision to build his foundation in hopes to live a rewarding life and pass his wealth for generations to come. Darious beat the odds of the typical stereotypes of a young black male growing up in the urban community of Chicago’s Westside. Though he graduated from College, secured a promising career and moved to Hyde Park; he was still humble and visited his old neighborhood. He motivated his childhood friends and family to never give up, create their own path, and introduced them to new experiences outside of the neighborhood others the importance of savings, investing, building good credit, and obtaining life insurance. Darious was preceded in death by his grandparents, Jerry Lockett Sr., Mary Lockett, and Lillie Mae Ross. Darious leaves to cherish his memory his devoted parents: David Lockett Sr. and Clydell Lockett Sr,; his grandfather: Deacon Clyde Ross; his wife: Sharee Lockett; one son: Josiah Tucker-Lockett; seven siblings: Mikeya Summervile, Tiffany Ross, Shanika (James) Curry, David Lockett, Daniel Lockett, Darsh’i Lockett, and Alexa Ross. His loving nieces: Jazmyn, Janai, Kaylani,Special; His loving nephews: Dawson, Dameir, and Paris; He also leaves to cherish his memory two special childhood friends: Maurice Harris and Lawrence Johnson; two special adulthood friends: Anthony Leflore and Shaun Brown and a host of uncles, cousins, and friends. As a devoted husband, father, son, and brother, he will be deeply missed, but impact of his teachings and spirit shall live on forever. This is a man who’s giving and loving actions show us what it truly means to be an “A Hero.” Visitation Services will be held at A.R. Leak and Sons Funeral Home 7838 South Cottage Grove Ave Chicago, IL 60619on Friday, September 20, 2019 from 2:00p.m. to 5:00p.m. There will be words of encouragement and a prayer from 5:00 p.m. to 6:00 p.m. Services will be held September 21, 2019 at Bethel Deliverance Center C.O.G.I.C Church at 5330 West Division Street Chicago, IL 60651. Darious will be entombed at Wood lawn Cemetery Mausoleum 7600 West Cermak Road Forest Park, IL 60130. Online condolences and words of encouragement can be made at twparkschapel.com. Services entrusted to A.R. Leak and Sons Funeral Home collaborated with T.W. Parks Colonial Chapel.

Darious A. Lockett, 30, of Peoria, and a lifelong resident of Chicago passed away in Marshall County, in Gods precious hands, on September 16, 2019 at 7:37 a.m. He was born March 12, 1989 in Chicago, IL to David and Clydell Lockett Sr,. As... View Obituary & Service Information

The family of Darious Anthony Lockett created this Life Tributes page to make it easy to share your memories.

Darious A. Lockett, 30, of Peoria, and a lifelong resident of...

Send flowers to the Lockett family.