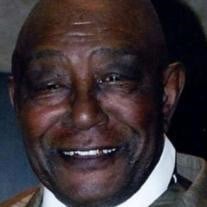 David Lee Jones 75, of Peoria passed away Thursday September 6, 2012 at 8:45 a.m. at Methodist Medical Center Hospital. He was born December 20, 1936 in Chambers MS, to James and Carrie Ola Sanders-Jones. Upon his father’s death he was raised by his mother and stepfather Nathaniel Little. He was preceded in death by his parents, 2 sons, 3 daughters, 1 brother and 1 sister. He is survived by 5 sons: David (Darlene), Kenneth (Martha), Marcus Jones all of Peoria, Jeffery Jones of Pasadena CA Chinedu Amaefula of Bloomington IN, 8 daughters: Mary Smith, Shirley Jones, Damita Palmer, Regina (Darryl) Murray, Heidi Jones, Catherine Jones, Dana (Todd) Banks, Danielle (Chris) Campbell all of Peoria, 2 brothers: Jessie Jones of Memphis TN, and S.K. Jones of Clarksdale MS, 1 sister: Mary Myles of Clarksdale MS, 24 grandchildren, 10 great-grandchildren, and three great-great grandchildren. David worked as a driver for Ideal Cab Co. and was last employed as a butcher at Calihan & Sons Packing Co. retiring in 2002 after 41 years of service. He was a member of St. Paul Baptist Church for over 40 years of faithfully serving in the Deacon ministry, St. Paul Male Chorus, and other leadership roles. He loved the Lord with great passion and was a committed servant giving honor and praise to him in gospel songs. He was President of the Religious Performance Alliance and participated in the Gospel Express Program. He performed with various quartets and groups within the city including the Twilights, The Chosen Few, and was an Honorary Lifetime Member of the Majestic Sons of Zion. He had a special love for family and friends near and far and was always traveling to be with them. He will be sadly missed by his family who loved him dearly and all of the lives with whom he touched. Services will be held Friday September 14, 2012 at 11:00 a.m. with visitation commencing one hour prior at 10:00 a.m. at St. Paul Baptist Church. Pastor Deveraux R. Hubbard will officiate. Deacon Jones will be laid to rest in the Swan Lake Memory Gardens. Family and friends will be received at 2808 W. Richmond Ave. The family has chosen T.W. Parks Colonial Chapel to handle the final arrangements.

David Lee Jones 75, of Peoria passed away Thursday September 6, 2012 at 8:45 a.m. at Methodist Medical Center Hospital. He was born December 20, 1936 in Chambers MS, to James and Carrie Ola Sanders-Jones. Upon his father’s death he was raised... View Obituary & Service Information

The family of Daved Lee Jones Sr. created this Life Tributes page to make it easy to share your memories.

Send flowers to the Jones family.