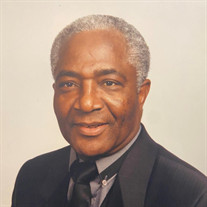 David D. Duncan Sr., 96, passed away in Peoria on Saturday, May 2, 2020, peacefully amongst family at “University Rehab at Northmoor Nursing Home” at 8:25p.m. He was born September 11, 1923 in Malvina, MS., however; was raised in Rosedale, MS by Robert Duncan and Lillie Mae Brown Austin Duncan, they preceded him in passing. He married Lillie Duncan in December of 1940 and conceived seven children. He was drafted in the Army in on October 24, 1944 where he served in WWII in Japan. He was honorably discharged on January 24, 1946. Lillie passed on July 11, 1976. He married Lueseal Duncan on April 10, 1980, she survives. David had a passion for playing checkers and played in many local tournaments in the Peoria area. He also enjoyed playing pool and gathering with his loving family. He was a dedicated member of the Mt. Zion M.B.C where he served on the usher board. He will be missed by his church family. In addition to his loving wife of 40 years Lueseal Duncan he leaves to cherish his precious memory: five sons: David (Betty) D. Duncan Jr.,of St. Louis, MO, Mose Duncan, George Duncan, Christopher (Sue) Duncan, and Grant (Esterline) Duncan all of Peoria; one step-son: Alphonso (Patricia) Smith of Louisville, KY; two daughters: Darlene (Willie) White and Shonnel Duncan both of Peoria.; four sister in-laws: Ruth Jones, Veardie Mae Hill, Classie Gayton, and Louiser Pointer; one brother in-law: L.V. Hill. A host of family and friends who will miss him dearly. In addition to his parents and his late wife Lillie he was preceded in death by; one son: Harold Duncan; one brother; three sisters; and seven grandchildren. A drive-up Visitation will be held on Tuesday, May 12,2020 at T.W. Parks Colonial Chapel, 201 N Mac Arthur Hwy Peoria, IL, at 10:00 a.m. to 12:00 p.m. A Celebration of life service will be held at 12:00 p.m. following the visitation service for immediate family. Those who would like to view via the app Zoom at 12:00 p.m. the ID# is 635 986 7225 Password:4s5A8q. Rev. Alphonso Lyons Jr. Pastor of Mt. Zion M.B.C. will officiate with Bishop Leroy Smith Jr. of Church of the Living God of Peoria assisting. David will be laid to rest at Springdale Cemetery.

The family of David D. Duncan Sr created this Life Tributes page to make it easy to share your memories.

Send flowers to the Duncan family.