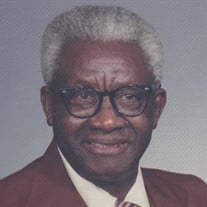 David Washington Sr., 95, of Peoria passed away on Wednesday, Oct. 22, 2014 at Rosewood Care Center of Peoria at 4:45 a.m. He was born April. 20, 1919 to the late Abraham and Lottie Washington. He was married for 72 years to his soul-mate Ethel Washington. She survives. David was a loving husband, father and grandfather. He was a faithful man who loved the Lord. He enjoyed fishing, hunting, playing pool and working on cars. David was a man of character who gave his children and grandchildren nicknames. He leaves to cherish his precious memories: his wife Ethel Washington of Peoria, four sons David (Vanessa) Washington Jr., of Peoria, Guy (Dorothy) Washington of Sacramento , CA., Gregory (Wanda) Washington and Marvin (Monisha) Washington both of Peoria; two daughters, Clara J. Washington of Peoria and Valerie (Bishop Harold) Dawson Sr. of Alpharetta, GA., four sisters Mary Washington- Hall of Kansas, MO., Dorothy (Jerome) Smith of Peoria, Willie Bell Mitchell of Dixon, Ill., and Clara ( Kenneth) Cooley of Greenville, MS., a host of grandchildren, great grandchildren and great great grandchildren. Along with a host of nieces, nephews, cousins and dear friends whom adored him and will miss him dearly. David was preceded in death by his parents, one daughter Joanne Davenport, four brothers and eight sisters and two grandchildren. Home-going celebration will be held at 11 a.m. on Saturday, Nov. 1, 2014, at Rising Sun Christian Center, with visitation commencing one hour prior at 10 a.m. Pastor John L. Gibson will officiate. David will be laid to rest in Swan Lake Cemetery. Arrangements were made especially for Davids’ family and professionally directed by T.W. Parks Colonial Chapel. Online condolences or words of encouragement can be made at www.twparkschapel.com.

The family of Mr David Washington Sr created this Life Tributes page to make it easy to share your memories.

David Washington Sr., 95, of Peoria passed away on Wednesday,...

Send flowers to the Washington family.