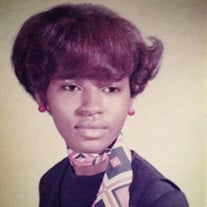 Delores Y. Morrison, 60, of Peoria passed away, entering heaven gates at 4:52 a.m. Thursday, Aug. 14, 2014, at her residents. She was born Jan. 6, 1954, in Clarksdale, MISS., to Eddie Brown Sr. and Pearlene Bell. She leaves behind her companion of 20 plus years Carthell Hayes. Delores was a God fearing women who loved to spend time with family and friends. She was the go to person in the family, a great listener who was very loving, caring, kind and willing to help anyone in need. She married Herman Morrison Sr. in 1975. She leaves to cherish her memory, her companion Carthell Hayes; two daughters, Sharice (Tony) Brown and Taiesa (Dennis) Morrison; one son, Herman (Dareth) Morrison Jr., all of Peoria; five brothers Maurice Brown of Peoria, Darrell (Sondra) Compton of Danville, Ill., Raymond (Pamela) Compton, Eric Brown, Jason Brown all of Peoria; four sisters, Rosetta (Theodore) Younger of Peoria, Sonya Compton of St. Paul, MN., Crystal (Eddie) Mann and Ebony Brown, special cousin Louise Brown all of Peoria, and eight grandchildren and two great grandchildren; along with a host of uncles, aunts, nephews, nieces, cousins and dear friends who adored and will miss her dearly. She was preceded in death by her father, one brother and 1 sister. A home-going celebration will be held at 11 a.m. Monday, Aug. 25, 2014, at Mt Sinai Baptist Church, with visitation commencing one hour prior at 10 a.m. The Rev. Cherry will officiate. Delores will rest in Springdale Cemetery. Family and friends received at 716 S. Sumner St. Arrangements were made especially for Delores' family and professionally directed by T.W. Parks Colonial Chapel. Online condolences or words of encouragement can be made at T W Parks Colonial Chapel - Peoria, IL

The family of Mrs Delores Yvonne Morrison created this Life Tributes page to make it easy to share your memories.

Send flowers to the Morrison family.