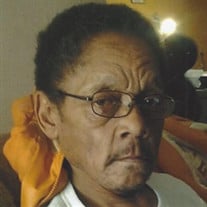 Donald E. Lane, 62, of Peoria passed away at 5 p.m. Friday, Aug. 29, 2014, at his residence, after losing his long fight with an illness. He was born Feb. 3, 1952, in Chicago, Ill., to the late Frank Lane and Alice Huston. He leaves behind the love of his life, Earline "Lynn" Foster. Donald was known to all as "D." He was due to marry the love of his life on Sept. 13, until God called him home. He loved to joke with the children. He loved his job at the Peoria Civic Center, where he was employed for more than 13 years. He served in the United States Army faithfully and was honorably discharged in 1976. He leaves to cherish his memory, his fiance, Lynn Foster; in-laws, Cubby and Bobbie Alexander; four stepsons, Robert (Kristy) Foster, Anthony Foster, Cornelius Thomas and Donzell Foster; two stepdaughters, Shanik (Stephan) Foster and Jessica Thomas; two brothers, Dorsey Fletcher and John Deal, all of Peoria; one sister, Denise Barnett of Chicago, Ill.; six special grandchildren, Keijah, Ja'Maryonna, Poo, De'Andre, Martex and Marshawn; and special friends, Larry and Megan, all of Peoria; with a host of uncles, aunts, nephews, nieces, cousins and dear friends who adored and will miss him dearly. He was preceded in death by his parents. A home-going celebration will be at 11 a.m. Wednesday, Sept. 10, 2014, at Liberty United Ministry, with visitation commencing one hour prior at 10 a.m. The Bishop Johnny Wright will officiate. Donald will be laid to rest in Camp Butler National Cemetery. Arrangements were made especially for Donald's family and professionally directed by T.W. Parks Colonial Chapel. Online condolences or words of encouragement can be made at www.twparkschapel.com

The family of Mr Donald Edward Lane created this Life Tributes page to make it easy to share your memories.

Send flowers to the Lane family.