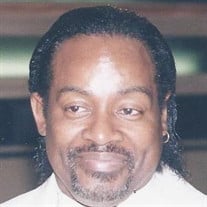 Dorsey Doss of Peoria, IL passed away June 30, 2016 at Rosewood Care Center in Galesburg, IL. He was born to the late Thomas and Gladys (Howell) Doss Jr. in Newport AR. Dorsey was educated in the public school system and graduated in 1968 from W.F. Branch High School. Being young and ambitious he was hired by Brown Jordan in Newport as well as served in the Army National Guard. Dorsey loved working on classic cars and riding motorcycles. He also held a double black belt in Karate. On October 31, 1967 he married the late Lula Mae McCoy. To this union one daughter was born. He married Georgia Brown in 1986. On November 27, 1999 he wed Rita G Williams and to this union, one son was born. Dorsey moved to Peoria in 1971 and began working at Caterpillar Inc. in 1972 retiring in 2002, after 30 years of service. After retirement, Dorsey started his own lawn care service. He leaves to cherish his memories: His loving and devoted wife, Reta G. Doss, one son, Dorsey (Robvet) Doss II, four daughters, Lula (Brandt) Brooks and Dorsey Ann Doss all of Peoria IL, Tiana Johnson of Winder GA, and Maria Doss of Chicago IL. One brother Donald (Marilyn) Doss Sr. of Peoria, IL, five sisters; Gladys (Richard) Dagadu, Brenda Idreez and Kathy Jordan, all of Peoria IL. Josephine (Thomas) Fair of Jackson MS, Flora Doss of Memphis TN and a host of grandchildren, nieces, nephews, cousins, relatives and friends who loved him dearly . Homegoing services will be held on Friday July8, 2016 at 11:00 a.m., with visitation commencing one hour prior at Greater City of Refuge Worship Center, where Bishop Timothy Criss is host pastor. Rev. Spencer Gibson will officiate. Interment will be private The Doss family has entrusted T.W. Parks Colonial Chapel with arrangements. Online condolence and words of encouragement can be made to www.twparkschapel.com

Dorsey Doss of Peoria, IL passed away June 30, 2016 at Rosewood Care Center in Galesburg, IL. He was born to the late Thomas and Gladys (Howell) Doss Jr. in Newport AR. Dorsey was educated in the public school system and graduated in 1968 from... View Obituary & Service Information

The family of Dorsey Doss created this Life Tributes page to make it easy to share your memories.

Send flowers to the Doss family.