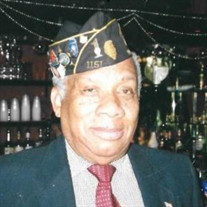 Frank Livingston Jr., 91, of Peoria departed this life, with his son Reggie by his side, on December 04, 2021, at Methodist Medical Center at 6:44 p.m. Frank was born on February 1, 1930, in Peoria, IL to Frank and Marie Livingston Sr, they precede him. Frank graduated from Peoria Central High School in 1947, then went on to serve in the Marines where he fought in the Korean War. Frank retired from Keystone Steel and Wire after being employed for 35 years. He was a proud member and commander of post #1151 of the American Legion, where he volunteered with the Premier Boys State program; mentoring young gentlemen to learn about the democratic political party, to apply knowledge and actual practice. He enjoyed gardening and antiquing. He mostly enjoyed spending time with his grandchildren, especially watching his grandson Shaun Livingston play basketball throughout his career. Frank leaves to cherish his precious memory: two sons: Reginald (Lori) Livingston and Kent Livingston both of Peoria; one brother: Barry Crooks of Peoria; seven grandchildren: Shaun (Joanna) Livingston of Oakland, CA, Sarah Livingston of the Bahamas, Jasmine Livingston, Corey Douglas, Cody Douglas, and Zarion Douglas all of Peoria, and Caryn (Nick) Kramer of Meriden, KS; three great- grandchildren: Tyler Livingston and Jonah Livingston of Oakland, CA, and Cecelia (half pint) Kramer of Meriden, KS; and a host of family and friends whom will miss him dearly. Frank, in addition to his loving parents was preceded in death by one daughter who died at birth; two brothers: Bootsie Crooks and Clarence Crooks; one sister: Betty Jones; longtime friend: Lisa Douglas. A Celebration of Life Service will be held on Friday, December 10, 2021, at T.W Parks Colonial Chapel at 11:00 a.m. with visitation commencing two hours prior at 9:00 a.m. Pastor Deveraux Hubbard of St. Paul Church will officiate. Frank will be laid to rest with military honors at Lutheran Cemetery. In lieu of flowers donations can be made to Carver Center.

Frank Livingston Jr., 91, of Peoria departed this life, with his son Reggie by his side, on December 04, 2021, at Methodist Medical Center at 6:44 p.m. Frank was born on February 1, 1930, in Peoria, IL to Frank and Marie Livingston Sr, they... View Obituary & Service Information

The family of Mr. Frank Livingston Jr. created this Life Tributes page to make it easy to share your memories.

Frank Livingston Jr., 91, of Peoria departed this life, with...

Send flowers to the Livingston family.