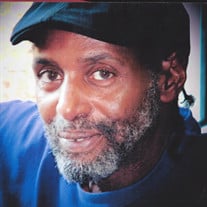 George Welch, 63, of Peoria passed away on Friday, Oct. 17, 2014 peacefully at his residence surrounded by family at 3:10 a.m. He was born Aug. 21, 1951 to the late Henry and Mary (Costic) Welch. He married h soul-mate Barbara Welch in 1997. She survives. George loved to spend time with family and friends, but most of all his grandchildren. He enjoyed working with children of all ages. George enjoyed watching Sports and the westerns channel. He was employed by the YMCA for 27 years. He leaves to cherish her precious memories: his wife Barbara Welch, his mother Mary Welch, one son Aaron Williams, five daughters: Lucretia Cagle, Camille (Carlos) Hines, April (Draneol) Hall, Latrika Cagle and Julian Cagle, all of Peoria; four brothers: Robert (Irmar) Costic, Jerome (Lynn) Costic, Michael Welch all of Peoria, and Wilburt (Trina) Smith of Los Vagas, CA., four sisters: Jackie Mckinley, Joann (James) Coates both of Peoria, Sandy Anderson of Bridge, VA and Denise (Fred) Davidson of Dunlap, Ill., 25 grandchildren, 5 great grandchildren. Along with a host of uncles, aunts, nieces, nephews, cousins and dear friends whom adored him and will miss him dearly. George was preceded in death by his father, two brothers, one sister and two grandchildren. Home-going celebration will be held at 9 a.m. on Saturday, Oct. 25, 2014, at Prince Of Peace MB Church, with visitation commencing one hour prior at 8 a.m. Pastor R.W. Randle will officiate. George will be laid to rest in Lutheran Cemetery. Arrangements were made especially for Georges’ family and professionally directed by T.W. Parks Colonial Chapel. Online condolences or words of encouragement can be made at www.twparkschapel.com.

The family of Mr George Welch created this Life Tributes page to make it easy to share your memories.

Send flowers to the Welch family.