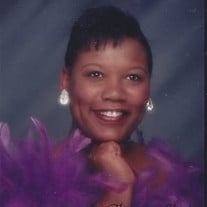 Jacqueline Ranae Jackson, 53, of Peoria answered God’s call on Monday, June 23, 2014 at St. Augustine Manor at 10:28 a.m. She was born June 22, 1961 in New Port, AR., to Virgile and Mattie Lee Dicus. She married her soul mate Darrett E. Jackson Sr. February 10, 1979. He Survives. Jacqueline loved to spend time with her family. She was nice to everyone that she crossed paths with. She was a hard working. She would stay you should speak to everyone you meet because you never know what kind of day they are having. She leaves to cherish her precious memories: her parents Virgile and Mattie Dicus of New Port, Ar., soulmate Darrett E. Jackson Sr., one son Darrett Jackson Jr. both of Peoria ; one brother Virgile Dicus Jr. of Brickley, AR. Nixon Jr., three sisters Theresa(Terry) Whorton of New Port, AR., OZetta (Fred) Dicus-Davis of Conway, AR. and Joyce Ann Dicus of New Port Ar. Along with a host of aunts, uncles, nieces, nephews, cousins and dear friends whom adored and will miss her dearly. Memorial service will be held at 11:00 a.m. on Saturday, June 28, 2014, at St. Augustine Manor located at 1301 NE Glendale Ave. Interment will take place at Mt. Zion Cemetery at 163 Jackson 370 Shoffner, AR. 72112. Arrangements were made especially for Jacqueline’s’ family and professionally directed by T.W. Parks Colonial Chapel. Online condolences or words of encouragement can be made at www.twparkschapel.com.

The family of Mrs Jacqueline Ranae Jackson created this Life Tributes page to make it easy to share your memories.

Send flowers to the Jackson family.