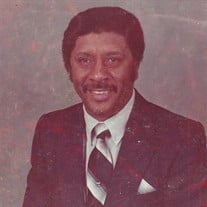 James A. Caruth, 79, of Peoria passed away, entering heaven gates at 3:03 a.m. Friday, Aug. 29, 2014, at OSF St. Francis Medical Center Emergency Room Dept. He was born Oct. 6, 1934, in Ripley, MS., to the late James and Mary (Jefferie) Caruth. He leaves behind his wife of 34 years Ella (Polly) Caruth. She Survives. James loved to spend time with his family and friends. James retired from Keystone Steel and Wire Co after 30 years. He loved to play music, he was an accomplished guitarist and he lasted played for the Church of the Living God. He was formerly of the band Volcano’s and also played with Wild Child Gibson and many others. He was skillful with his hands, completing many woodworking projects in his home . He was a wise man… James was a counselor too many, as well as an encourager. He was a man of splendor, sartorial elegance. Simply put he was always a well -dressed man of finery without even a hair out of place. He leaves to cherish his memory, his wife Polly Caruth; two sons, Gregory Caruth and step-son Michael Owens both of Peoria; two daughters, Sandra Kay (Durwin) Boone and Sharon ( Shari) (Rev. Vance) Jordan both of Peoria; two sister in-laws Ann Wring of Holly Spring, MS. and Sandy Stallion of East Peoria; a special niece Gail Kimbrough of Oak Land, CA.; and special nephew Elder Robert Caruth Jr., of Peoria ,ten grandchildren and fifteen great grandchildren; along with a host of cousins and other family members and dear friends who adored and will miss him dearly. He was preceded in death by his parents, one daughter Gwendolyn Caruth and one brother Robert A. Caruth,Sr. A home-going celebration will be held at 12 noon Friday, Sept. 5, 2014, at Star of Hope Full Gospel Church, with visitation commencing one hour prior at 11:00 a.m. The Bishop Joseph Johnson will officiate. James will be laid to rest in Lutheran Cemetery. Arrangements were made especially for James' family and professionally directed by T.W. Parks Colonial Chapel. Online condolences or words of encouragement can be made at www.twparkschapel.com.

The family of Mr James Allen Caruth created this Life Tributes page to make it easy to share your memories.

James A. Caruth, 79, of Peoria passed away, entering heaven gates...

Send flowers to the Caruth family.