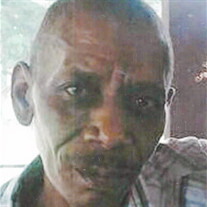 James E. Hightower Sr., 57, of Peoria passed away at 9:54 a.m. on Saturday, Jan. 3, 2015 at OSF St. Francis Medical Center. He was married to the late Rhonda Parker-Hightower. She precedes him. He was born on Jul. 18, 1957 in Peoria to the late Robert and Claudia (Polk) Hightower. James loved to spend time with his family and friends. He enjoyed laughing, telling jokes and giving family members nicknames. James was a cook at Court Estates in Peoria for many years. He leaves to cherish his precious memories his children; one sons James Hightower Jr.; three daughters LaTosha , Bonita and Sharon Webster; three step children Edward (Emma)Parker, Martell Webster and Ghia Parker all of Peoria; five brothers Robert (Michelle) Hightower Jr. of Montgomery, TX., Gregory Hightower, Cary (Alicia) Hightower, Kermit Moore and Sherron Moore all of Peoria; two sisters LaFelda Hightower and Chataqua Hightower both of Peoria; 29 grandchildren and 4 great grandchildren. Along with a host of aunts, uncles, nieces, nephews, cousins and dear friends who adored him and will miss him dearly. James was preceded in death by his wife, one daughter Sharonda Webster, step on Vencent Alexander, one sister and two grandchildren. A home-going celebration will be at 11 a.m. Wednesday, Jan. 14, 2015, at T W Parks Colonial Chapels, with visitation commencing one hour prior at 10 a.m. The Rev. Paul Hightower will officiate. James interment will be private. Arrangements were made especially for James' family and professionally directed by T.W. Parks Colonial Chapel. Online condolences or words of encouragement can be made at www.twparkschapel.com

The family of Mr James E. Hightower Sr. created this Life Tributes page to make it easy to share your memories.

Send flowers to the Hightower family.