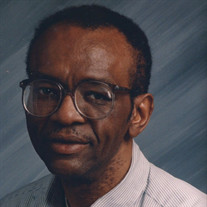 Jesse James Russell Sr., 73, of Peoria passed away at 8:15 p.m. on Saturday, Sept. 13, 2014, at Proctor Hospital. He was on born May 28, 1941 in Tchula, MS., to the late Elmore Russell and Mary Watson. Jesse was a family man; he loved to tease family members about their cooking. He was a gentle giant who loved to tell jokes and shoot pool. He was a people person who never met a stranger; he would talk to any and every one he encountered as if they were old friends. He leaves to cherish his memories, two sons, Jesse Russell Jr. and Tyrone Russell both of San Diego, CA.; three daughters, Priscilla Ammons and Beverly Johnson both of Peoria and Ruby Russell of Las Vegas, NV.; nine brothers, Jay Van (Karen) Russell Sr. of Chicago, Ill., Pastor Samuel (Deborah) Russell and Terrance Russell both of Peoria, Gregory (Jane) Russell of Little Rock, AK., Benjamin Russell of Carbondale, Ill., Michael Russell, Reginald (Stephany) Russell Sr. Timothy (Beverly) Russell Sr., Elmore Russell Jr.; three sisters Lula Lyons, Pamela Russell and Tina (Curtis) Rucker all of Peoria, at host of grandchildren and great grandchildren; along with a host of uncles, aunts, nieces, nephew, cousins and dear friends who adored and will miss him dearly. Jesse was preceded in death by his parents, 6 brothers and 2 sisters. A home-going celebration will be held at 12 noon on Saturday, Sept. 20, 2014, at New Testament Fellowship Church, with visitation commencing one hour prior at 11 a.m. Pastor Samuel Russell will officiate. Interment will be private. Friends and family will be received at 1604 N Linn St Peoria, Ill. 61604 Arrangements were made especially for Jesses' family and professionally directed by T.W. Parks Colonial Chapel. Online condolences or words of encouragement can be made at www.twparkschapel.com.

The family of Mr Jesse James Russell Sr created this Life Tributes page to make it easy to share your memories.

Send flowers to the Russell family.