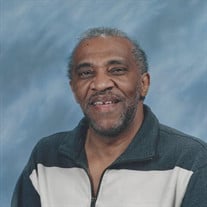 John’s Life John was a faithful member of Rising Sun Christian Church. He was a Deacon, the choir president, member of the male chorus and Sunday school superintendent. He worked at Keystone Steel & Wire Co. he was also employed at Pabst until the company relocated to Wisconsin. He was an active member of the NAACP. John’s craft was his hands. He loved to cut hair and excelled at it for over 50 years at various barbershops with 25 years at Kelley Allen Kelley (K.A.K,) Barbershop where he always had a smile, some mentoring words or a listening ear to his customers. He was known by many for his mild demeanor, laid back personality and a packet of Lance cherry sours! He was a community man and loved working with children. Many children looked up to him as a role model and mentor. He loved motor cycles. He also loved looking for cars for himself and others. John loved a clean car and loved conversation about them with his sons, Kenny Scott, James McCoy and anyone else who was around. He also loved to travel, but in the midst of traveling, he loved a good home cooked meal to include pound cake or banana pudding. John came from a musical family which set the foundation for his love of singing and performing. In High school, John sang in the Madrigals, which was one of the stepping stone of his musical learning. He played many instruments and had a great ear for harmony. He sang with a quartet group that consisted of his two brothers; Lawrence Kelly and Robert Ford along with Pastor John Gibson and ______. He was also the leader of various bands/groups including 2+5 Soul Steppers, Page 2 and Good & Plenty. Good & Plenty celebrated their 30th anniversary eight years ago which was his last stage performance. Former members of the band were; George Governor-Forman Mike Lobdell, Freddie Coates, Harvey McGruder, Kathy (NeNe) Robinson, Baby Boy Foreman, Paul Hightower, Doug Washington, Steve Thomas, James Warren, Tyrone Burns and the late Jerry Porter and the late Tony Kyle and the late Charles Williams. Good and Plenty was the opening act for The Jackson Five in the late 60's at St. Patrick’s Hall. John was not only a husband; he was a father and friend. He was very outgoing and will be missed by all that knew and loved him. One of his proudest moments was when he and his wife walked the red carpet in Hollywood, CA. when his son was nominated for a Grammy Award for a song he wrote and produced for Earth Wind & Fire (one of his favorite groups). John’s soul was anchored in the Lord and he will be deeply missed, but we know he is in a better place. He enjoyed his life; a great journey here on earth but God knew his journey and called him home to complete his heavenly journey

John&#8217;s Life John was a faithful member of Rising Sun Christian Church. He was a Deacon, the choir president, member of the male chorus and Sunday school superintendent. He worked at Keystone Steel & Wire Co. he was also employed at Pabst... View Obituary & Service Information

The family of Mr John Eddie Kelley Jr created this Life Tributes page to make it easy to share your memories.

Send flowers to the Kelley family.