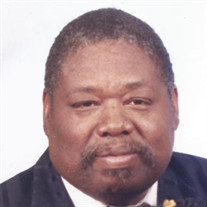 PEORIA - Lawrence R. Randall, 63, of Peoria passed away at 7:54 p.m. Thursday, Sept. 18, 2014, at his residence. He was born on Sept. 12, 1951, in Little Rock, Ark., to the late Lawrence Randall and Johnnie L. (Harris) Bell. He leaves behind his wife of 40 years, Theresa Randall. Lawrence was the pastor and founder of True Spirit M.B. Church. He was truly a family man who loved to fish and bowl. His passion was helping others and working with the youth. He served in the U.S. Marine Corps. After completing his three-year enlistment, he signed up for the U.S. Army for a three-year enlistment. He leaves to cherish his memory his mother, Johnnie Bell, and his faithful wife, Theresa Randall, both of Peoria; five sons, Derrick Randall of Missouri, Dorral Marsenburg of Little Rock, Ark., and Victor (Armenece) Randall, Patrick (Sonya) Randall and Lawrence Randall II, all of Peoria; two daughters, Iris (Keith) Randall-Evans of Fort Knox, Ky., and Natasha Scott of Little Rock, Ark.; seven brothers, Fredrick Randall of Washington, D.C., Arnett Randall of Peoria, Myron (Deborah) Randall of Grand Rapids, Mich., James Bell and Jeffery (Joann) Bell, both of Peoria, David Bell of St. Joe, Mich., and Denormous Bell of Benton Harbor, Mich.; five sisters, Gerry Stewart of Little Rock, Ark., Rhonda Randall of Kansas City, Kan., Jamie (James) Bell-Hollins of Peoria and Stephanie (Gerald) Gunter and Thelma Bell, both of Benton Harbor, Mich.; 13 grandchildren; and three great-grandchildren; along with a host of uncles, aunts, nephews, nieces, cousins and dear friends who adored him and will miss him dearly. He was preceded in death by his father and one brother. A home-going celebration will be at 9 a.m. Friday, Sept. 26, 2014, at Mount Olive M.B. Church, with visitation commencing one hour prior at 8 a.m. The Rev. Jimmie Burnside will officiate, with the Rev. Chuck Brown as host pastor. Lawrence will be laid to rest in Camp Butler National Cemetery. Arrangements were made especially for Lawrence's family and professionally directed by T.W. Parks Colonial Chapel. Online condolences or words of encouragement can be made at www.twparkschapel.com.

The family of Mr Lawrence Raymond Randall created this Life Tributes page to make it easy to share your memories.

Send flowers to the Randall family.