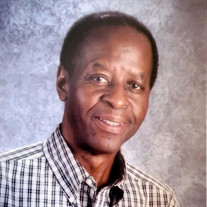 Lawrence Earl Washington,68, peacefully made his transition on Thursday, August 13, 2020 at Aperion Nursing Home. Lawrence Earl Washington was born on August 11, 1952 to Abraham and Maggie (Jackson) Washington in Peoria, Illinois. He received his formal education in the Peoria public school system. After graduating from Peoria High School, Lawrence attended Illinois State University and received his Associates degree in art. Lawrence was drafted into the United States Army on June 23, 1972 and was honorably discharged in 1974 after being stationed at Fort Polk, Louisiana. For most of his professional career, Lawrence devoted his life to education and worked tirelessly to enrich the lives of adolescents and teenagers residing in the Peoria community. He served as a residential counselor for the Children’s Home Association before retiring after 18 years of dedicated service. Subsequent to retirement, Lawrence briefly worked for Peoria Public Schools. Lawrence accepted Christ at an early age and in his later years, he regularly attended St. Paul Baptist Church, under the leadership of Senior Pastor Deveraux Hubbard. In his leisure time, Lawrence had a passion for jazz, cooking, African art, and he was a devoted Chicago sports fan. He was preceded in death by his (father) Abraham, (mother) Maggie, and (sister) Lillie. He leaves to celebrate his life and cherish his memories: one brother: Herbert Washington; one sister: Ernestine Davis; one son: Corey (Tia) Washington; one daughter: Lauren Palmer; five grandchildren, Dion, Laila, Caleb, Jadon & Zoe, and a host of nieces, nephews and other relatives and special family and friends whom will miss him dearly. A Memorial service will be held August 22, 2020 at T.W. Parks Colonial Chapel at 1:00 p.m. Rev. Alvin Riley Sr. Pastor of Sovereign Grace Missionary Baptist Church will officiate. Due to COVID-19 mandates mask and social distancing are required. Interment will be private.

The family of Mr. Lawrence Earl Washington created this Life Tributes page to make it easy to share your memories.

Lawrence Earl Washington,68, peacefully made his transition on...

Send flowers to the Washington family.