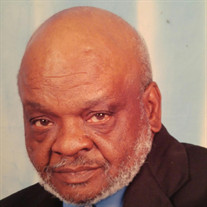 Lee J. Brown., 68, of Peoria passed away at Unity Point Methodist Medical Center at 11:03 a.m. Monday December 14, 2015. He was born February 25, 1947 in Peoria, IL. to the late Moses Brown and Hannah Taylor. Lee was a faithful member at The Church of The Living God temple no. 130, Spending time with family and friends was a favorite past time of his because he loved his family, he had a soft spot in his heart for the little children. Lee loved to shop and one of his favorite places was Walmart he sometimes went twice a day. Peoria Chiefs was his favorite team. He was self-employed where he later retired. He leaves to cherish his precious memories, his wife and friend Martha Brown, two sons Tony(Geraldine)Johnson, Terry Johnson, two daughters Swannita Brown, and Orill Johnson all of Peoria He also reared other children as his own; Katherine Jackson, Debra Johnson, Dedrick Cooper, and Dominque Cooper all of Peoria. Four brothers; William D Brown, Chester (Joyce) Brown, Matthew Brown and Shawn Brown all of Peoria. Two sisters Vernell Nickelson and Mickey Jordan both of Peoria. Along with a host of grandchildren, great grandchildren, aunts, uncles, nieces, nephews, cousins and dear friends whom loved and will miss him dearly. He was preceded in death by his parents, three brothers, and two sisters. Services will be held at 11:00 a.m. on Saturday, December 19, 2015, at The Church OF the Living God #130, with visitation commencing one hour prior at 10:00 a.m. Vice Chief Bishop Leroy Smith Jr. will officiate. Lee will be laid to rest at Camp Butler National Cemerery on Monday December 21, 2015 at 11:00a.m.. Services were arranged with care in loving memory especially for Lee’s family and professionally directed by T.W. Parks Colonial Chapel Online condolences for words of encouragement can be made at www.twparkschapel.com

The family of Lee Junior Brown created this Life Tributes page to make it easy to share your memories.

Send flowers to the Brown family.