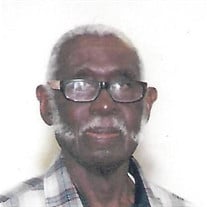 Louis George“LG” Dunaway, 99, passed away Sunday, April 10, 2016, at Farmington Country Manor in Farmington, IL. LG was born August 25, 1916 to Teamous Dunaway and Sallie Smith he was the only sibling of his sister, Ella V. Carter, whom he loved dearly. While living in Louisiana, LG worked for the Papermill and later met Coreine Harris, who in 1939 he married in Peoria, IL. LG served in the Army in WWII. After the war LG worked at Prcotor Hospital for many years and the Blue Note, both in Peoria, IL. LG was lifetime member of the American Legion Post 1151, a Mason and a longstanding frequenter of the Peter H. Clark Elks Lodge 483 where he would attend an annual birthday party hosted by the members. LG enjoyed playing dominos and was an avid Pinochle player. LG was actively involved at the Institute of Physical Medicine and Rehabilitation Senior World in Peoria, IL, where on June 8, 2012, he met and talked to the legendary Cubs Hall of Famer Ernie Banks “Mr. Cub”. Mr. Cub spoke of how Mr. Dunaway, a pioneer for African Americans who played first base in the Negro Baseball League—paved the way for him. LG was proud to be a member of the South Side Clippers in the Negro League. LG loved sports. In addition to baseball, he had a passion for watching NCAA and NBA basketball games, but he especially enjoyed watching the local high school games on TV. For all who knew LG, they would agree that the real love of his life was fishing. He loved to fish, take people fishing and selling the fish afterwards. People knew that if they weren’t able to catch LG at home, they knew that he was more than likely on the fishing banks. LG would travel all over to find the best fishing holes and would fish from sun up to sun down! LG is survived by his son Mike Smith; daughter Deborah Davis and son Rodrick Dunaway; 11 grandchildren, great-grandchildren, great-great grandchildren and a host of nieces and nephews. LG was preceded in death by his parents; his sister; a daughter, Cynthia (Dunaway) Higgins; a granddaughter Felicia Gayle Dunaway; a grandson Darryle Guthrie and a great grandson, Darius Guthrie. Louis will be laid to rest in Camp Butler Cemetery. In lieu of flowers, memorials and online condolences may be made at www.twparkschapel.com

The family of Louis G Dunaway created this Life Tributes page to make it easy to share your memories.

Send flowers to the Dunaway family.