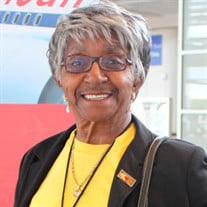 Mother Mary Armstrong, 92, of Peoria, IL died Friday morning, March 11, 2022. She passed peacefully in her sleep. Her primary caregiver was Barbara Armstrong, OSF Hospice, and other family members. We are forever grateful for there diligence, love, and care tendered. Mary Edna Armstrong was born on October 29, 1929 in Louisiana, MO to Theodore J. Norton and Georgia Davis Norton. Active in her life were her grandparents Russie and Willie Davis. She attended a one-room school house in the country where she met the love of her life, James W. Armstrong. After grade school, she moved to St. Louis, MO to live with her aunt and uncle. She graduated Somner High School in 3 1/2 years, January 1950. During school, she supported herself by working in a garment shirt factory and a fast food restaurant. On April 16, 1950, she married James Armstrong and moved to Peoria, IL where they started a family. They were married over 64 years until his death in 2014. When the youngest of her six children was in kindergarten, Mary started back to work as an outreach coordinator for seven years. She later advanced to the role of supervisor at Peoria Community Action Agency. In helping others, she was encouraged to apply for scholarships in pursuit of her own education. She graduated with honors from Illinois Central College and Bradley University. She earned an Associate Degree in counseling, a Bachelor and Master Degree in Education and Counseling. She taught at Holy Family Catholic School for four years, and 12 years with Peoria School District 150. She retired in 1990; the same year as her husband. When she moved to Peoria, Mary and her husband James became members of Grace Missionary Baptist Church (1950-1964), and later joined Friendship Missionary Baptist Church (1964-2022). She served in many positions including: secretary in choir, missionary society chair, Young Peoples' Day and on the finance committee of the Central District Association. Mary also taught Cradle Roll in Sunday school while at Grace. At both Grace and Friendship, she served on the Deaconess Board, and sung in the choir. Mary also served as President of the Mission Society and on the Mothers' Board while reaching out to seniors, the sick, recovering and/or bereaved, through a Scriptural card ministry. Everyone knew Mary Armstrong loved to bowl. She often participated in tournaments during which she would encourage any person over 50 to bowl and stay active. Mother Armstrong is celebrated by her children, grandchildren, sister, and a host of other relative. Daughters: Barbara Armstrong of Peoria; Ruth Patton of Slater, MO; and Mary (Michael) Criss of Peoria. Sons: James R. Armstrong of St. Joseph, MO and Kenneth Armstrong Sr. of Peoria. Sister: Cheryl (Ralph) Reynolds of Peoria. Fifteen grandchildren, 25 great grandchildren, and eight great-great grandchildren. She was preceded in death by her husband, her daughter Jittaun L. McNary, two grandchildren and two great grandchildren. A celebration of life service will be held at Friendship Missionary Baptist Church in Peoria, IL on Thursday, March 17, 2022 at 11:00 A.M. Reverend Doctor Claude Russell Jr. presiding. Visitation will be held one hour prior to service. Interment will follow in the Swan Lake Memorial Gardens, also in Peoria. Online condolences and acknowledgments will be made at twparkschapel.com. Due to Covid-19, both mask and social distancing are mandated.

Mother Mary Armstrong, 92, of Peoria, IL died Friday morning, March 11, 2022. She passed peacefully in her sleep. Her primary caregiver was Barbara Armstrong, OSF Hospice, and other family members. We are forever grateful for there diligence,... View Obituary & Service Information

The family of Mrs. Mary E. Armstrong created this Life Tributes page to make it easy to share your memories.

Send flowers to the Armstrong family.