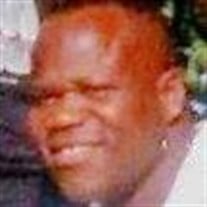 Rickie R. Sanders, 58, of Peoria passed away at 1:40 p.m. Saturday, April 4, 2015 at his residence. He was born on Jan. 17, 1957 in Peoria to Andrew Taylor and Ouckevious (Sanders) Dickerson, but was raised by his great-great Aunt Mary J. Brown and aunt Melissa Porch. He was joined in love to his fiancée Kimberly Johnson over 30 years. She survives. Rickie loved his family and adored his children. He was known for his fast talking, he never met a stranger and spoke with everyone that crossed his path. He was a car enthusiastic. Rickie was proud of his city and took much pride in being born and raised in Peoria. He leaves to cherish his precious memories: his father, Andrew Taylor; mother, Ouckevious (Sanders) Dickerson of Milwaukee, WI. ; aunt, Melissa Porch of Peoria; special mom, Lerleen Smith of Peoria; fiancée, Kimberly Johnson of Peoria; three daughters, Santia (Lamont) Smith-Brown, Rickita Sanders and Keyonna Sanders all of Peoria; four sons, Ryan (Tiffany) Boyd of Snellville, GA., Andel Gillespie of Indianapolis, IN., Rozell Thomas of St. Louis, MO., and Ricco Johnson of Peoria; four sisters, Norma J. Dickerson and Shawnder Barbee both of Milwaukee, WI., Loretta (Charlie) Simpson and Gloria (Luke) Smith both of Peoria; four brothers John Sanders, Earl Sanders both of Peoria, James Dickerson and Alvin Dickerson both of Milwaukee, WI.; cousins Vickie Kimber of Peoria and Wanda Norris of Maywood, Ill.; 11 grandchildren. Along with a host of aunts, uncles, nieces, nephews, cousins and dear friends whom adored and will miss him dearly. Rickie was preceded in death by his grandmother, Maggie Bradley; two aunts, Mary J. Brown and Norma J. Freeman and three brothers. Home-going celebration will be held at 10 a.m. on Saturday, April 11, 2015, at Greater City of Refuge Worship Center , with visitation commencing one hour prior at 9 a.m. Pastor Jessie Artis will officiate, Bishop Timothy Criss will serve as host pastor Rickie will be laid to rest in Springdale Cemetery. Arrangements were made especially for Rickie’s family and professionally directed by T.W. Parks Colonial Chapel. Online condolences or words of encouragement can be made at www.twparkschapel.com .

Rickie R. Sanders, 58, of Peoria passed away at 1:40 p.m. Saturday, April 4, 2015 at his residence. He was born on Jan. 17, 1957 in Peoria to Andrew Taylor and Ouckevious (Sanders) Dickerson, but was raised by his great-great Aunt Mary J. Brown... View Obituary & Service Information

The family of Mr Rickie Renee Sanders created this Life Tributes page to make it easy to share your memories.

Send flowers to the Sanders family.