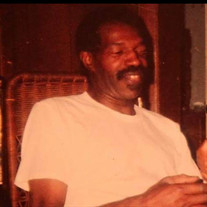 Theodore Johnson, 64, of Peoria answered God’s call on Tue., March 29, 2016 at his residence at 11:41 p.m. He was born June 27, 1951 in Bartlesville, OK. to the late Theodore Patterson and Bertha Johnson. Theodore was a true character who loved and lived life to the fullest. He loved his family and friends, but his grandchildren held his heart. Theodore served in the United States Army and was honorably discharged. He was a hardworking man who loved fishing, playing solitaire and traveling. He leaves to cherish his precious memories: his son Lisco (Lakora) Loyd of Lithonia, GA; two daughters Ann Anderson and Shikki Johnson both of St. Paul, MN; 13 grandchildren; Isiah, Nyla, Corey, Jayla Loyd, Ki'Mar Johnson, Amyjha Johnson, Shania Johnson, Areianna Anderson, Alexis Anderson, Andrea Murry, Alana Murry, Tanisha Franklin and Tevin Anderson . Along with a host of other family and friends, whom loved and adored him. He was preceded in death by his parents, Theodore Patterson and Bertha Johnson., one brother Leon Johnson and two sisters Coretta Smith and Darlene Johnson. Service for Theodore will be private. Arrangements were made especially for Theodores’ family and professionally directed by T.W. Parks Colonial Chapel. Online condolences or words of encouragement can be made at www.twparkschapel.com.

The family of Theodore Johnson created this Life Tributes page to make it easy to share your memories.

Send flowers to the Johnson family.