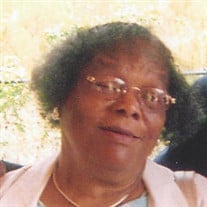 Velma T. Sanders, 84 of Peoria passed away on Saturday January 28, 2017 at 11:49 p.m. She was born August 23, 1932 in Lexington, MS. to Estell Rowe and Beatrice Davis- Rowe. They preceded her in death. She was married to Willie Sanders for 49 years. He also preceded her in death. She was a dedicated member of Holy Tabernacle COGIC, under the leadership of Elder Robert J. Criss, Sr. where she served as a senior church mother, and a prayer warrior. Velma also loved to cook, travel and grow plants. She is survived by one son; Willie Sanders Jr. of Minneapolis, MN., nine daughters; Josie (Stephen) Sanders-McNew of California, Clementine “Tina” (Robert ) Sanders- Criss Jr. of Peoria, Daisy Sanders- Moore of Peoria, Mary (Ken) Sanders Turner of Peoria, Zelena (Michael) Sanders –Winters of Peoria, Polly (Freddie) Sanders- Bynum of Hampton VA., Victoria Sanders of Peoria, Tammy ( Roger) Sanders Scott- McChristian of Peoria, and Grace Sanders of Phoenix AZ., one brother; Ezell (Eunice) Rowe of Chicago IL., more than fifty grandchildren and other family members. In addition to her parents and husband she was also preceded in death by one son Ezell Sanders and two brothers. Velma will be laid to rest in Lutheran Cemetery. Services will be held on Saturday, February 4, 2017 at 12:00 p.m., with visitation commencing one hour prior at 11a.m. at Holy Tabernacle COGIC. Elder Fred Watson Jr. will officiate. Online condolences and words of encouragement can be made at www.twparkschapel.com.

The family of Velma T. Sanders created this Life Tributes page to make it easy to share your memories.

Velma T. Sanders, 84 of Peoria passed away on Saturday January...

Send flowers to the Sanders family.