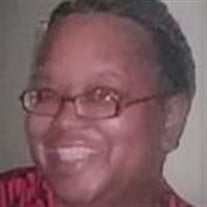 Venita Lenore Statam was born May 2, 1967, in Chicago IL to James Allen Patterson and Youlas Lorran Patterson (better known as Ms P), who both proceeded her in death. She attended and graduated from Martin Luther King H.S. Class of 1986, Venita loved being a Jaguar and a Cheerleader, then attending the reunion picnics with her fellow King graduates and siblings. While attending King High School Venita met the love of her life Michael Statam and the two later married, prior to being wed to Michael, Venita met and had two beautiful children with Andre Maurice Brewer (who also proceeded her in death). Through her union’s Venita was gifted with four children, Antonio Leandre Brewer (Cassandra); Anita Latrice Brewer-Fisher (Brian); Makida Lanice Statam; and Mashaun Lashay Statam. Venita accepted Christ at an early age with her father James being the custodian of Grant Memorial AME Church. The family attended church on a regular basis and Venita was made the God daughter of Pastor and Mrs. Roy Miller, of Grant Memorial Church and was further adopted into God’s kingdom. Venita was a wonderful cook, she learned that from Ms.P, they would love to be in the kitchen together whipping up meals and especially during the holidays and absolutely on Thanksgiving. Cooking became the way Venita and her mom would bond, Venita carried on that tradition and would often cook meals for her siblings and later cooking for her family was something Venita did well and enjoyed. Venita was the middle child of her five siblings, having two older and three younger siblings, she became known in her later years as Co-Co. Co-Co was always the life of the party, she made certain that everyone around her was smiling and having fun, she was a Cheerleader at King HS and never let us forget it, even after putting on a few extra pounds Venita still had no problem at gatherings breaking it down and getting back into her splits, even at 50 years old, the Cheerleader in her was always there. Venita was colorful, she loved bright vibrant colors and her favorites were Grey and Pink, she was also the sensitive one of the family, crying at the drop of a hat but on one hand as tough as nails. She was also the Poet of the family writing poems for many of our significant family events. Venita Lenore Statam received her WINGS on Tuesday, October 23, 2018, leaving her five siblings Derrick Lenard Gills, Lisa Lorraine Marsh (Darnell), James Lawon Gills (Lee), Allen Lemont Gills and our baby girl Tracy Lenona Gills-Reese all to mourn her. Venita please kiss our recently departed relatives as well as mom and dad for us. Tuesday, October 23, 2018, marked the end of an era, never again will the six of us be able to gather again under one roof in honor of Ms. P, ever again, Venita always wanted to be first, she was also called “The First Lady”, and now she truly is 1st. We miss you 1st Lady!! Venita leaves to cherish her memory her husband of 18 years Michael Statam, four children, Antonio Leandre Brewer (Cassandra); Anita Latrice Brewer-Fisher (Brian); Makida Lanice Statam; and Mashaun Lashay Statam, her six siblings, her 20 grand children whom she adored, especially her baby Ar’Miyah Lanijah Yarbrough, better known as MyMy, and a host of nieces, nephews, aunts, uncles, cousins and other loved ones. The first lady has left the building!

Venita Lenore Statam was born May 2, 1967, in Chicago IL to James Allen Patterson and Youlas Lorran Patterson (better known as Ms P), who both proceeded her in death. She attended and graduated from Martin Luther King H.S. Class of 1986, Venita... View Obituary & Service Information

The family of Venita L Statam created this Life Tributes page to make it easy to share your memories.

Send flowers to the Statam family.