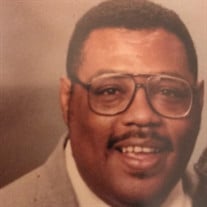 Willie J. Jackson, 62, of Peoria passed away on Saturday June 03, 2017 at 3:15p.m. He was born on July 5, 1954 in Peoria IL., to Rev. Dave Jackson Sr. and Estella Gordon. She survives. He married Jeannette (Bonds) Jackson in 1973. She also survives. Willie was a dedicated member of St. Paul Baptist Church, under the leadership of Senior Pastor Deveraux Hubbard. He was a person of wisdom and many words of conversation. Willie would always acknowledge being blessed. He loved music, playing the piano and mentoring his nephews. Most perceived him as a preacher and a counselor. Family was always first to Willie; but most of all his mother was a priority. He was the owner and operator of Jamee Jewelry and Merchandise and ISB Accountant and Income Tax Service. In addition to his mother and wife he leaves to cherish his memories three daughters: Antuana (Edwin) Winston of Houston TX., Saveya (Kozill Robinson Sr.) Jackson and Willitia (Manuel Lopez) Jackson both of Peoria: three brothers: Randy (Marcia) Jackson of St. Louis, Richard Jackson and Samuel Jackson l of Springfield IL., seven sisters: Christine (Henry) Jackson, Celie Linwood, Rev Estella (Eddie) Flowers, all of Peoria, Mallie (Isadore) McDuffy of Champaign, Mary (Ted) Jenkins, Rev. Linda Butler both of Peoria and Rose Oyeyemi of Dayton OH., eight grandchildren and a host of other family members and friends. In addition to his father Dave Jackson Sr. he was preceded in death by two brothers: Charles Hearn and Dave Jackson Jr. Willie will be laid to rest in Lutheran Cemetery. Services will be held on Saturday June 10, 2017 at 11:00a.m. at St. Paul Baptist Church with visitation commencing one hour prior. Senior Pastor Deveraux Hubbard will officiate. Family and friends will be received on Thursday and Friday at 611 W. Armstrong in Peoria after 5pm. Online condolences and words of encouragement can be made at www.twparkschapel.com.

The family of Willie J Jackson created this Life Tributes page to make it easy to share your memories.

Willie J. Jackson, 62, of Peoria passed away on Saturday June...

Send flowers to the Jackson family.