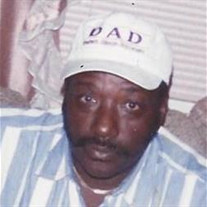 Willie, "Tractor Man" Jenkins, 70, of Peoria passed away on Saturday, February 20th, 2016, at Unity Point Proctor Hospital. He was born on March 13th, 1945, in Hollandale, Mississippi, to the late William and Vessie (Fain) Jenkins. Willie married Maxine Cross in Tchula Ms. in 1965 she survives. He later married Frances (Neal) on May 6th 1989, she preceded him in death. Willie was a God fearing, devoted father, who loved his family and would go above and beyond to ensure they were provided for. He enjoyed hunting, fishing, billiards, and was known for telling a great story and being the life of the party. He was a member of Local Union 649 and was previously employed by Otto Baum and Sons Construction, where he worked for over 30 years, before retiring April 1st, 2007. He was a member of Pleasant Grove Baptist Church for over 25 years and a member of St. Mark Missionary Baptist Church.Willie leaves to cherish his loving memories; 3 sons Darren (Ketra) Cross, Willie (Vonda), Jenkins, and Jeffery (Duronda) Jenkins, all of Peoria; 3 daughters, Daphne(George) Sephus, Bonita Neal, and Calandra (Johnathan) Neal all of Peoria; 3 brothers, Ezell (Trisha) Jenkins, of Peoria, Milton Jenkins of Quincy, Il, and Melvin (Felicia) Jenkins of Peoria; 7 Sisters, Doristine Cooper of Pompano Fl.., Geraldine White of Peoria, Il, Gloria Jenkins, of Ft. Lauderdale, Shirley Jackson, Hollandale, Ms., Delois Gibson of West Point, Ms., Benita Patterson and Veronica Jenkins of Hollandale Ms.; 18 grandchildren, 11 great grandchildren, along with a host of nieces, nephews, and close friends who loved him dearly.Willie was preceded in death by his parents, his wife Frances, and 2 brothers, Sonny and Robert Jenkins. Services will be held on Saturday, February 27th, 2016, at 10AM, at Mt. Moriah Missionary Baptist Church, with visitation one hour prior at 9AM. Pastor Trent Williams will officiate, and Pastor Jimmie Burnside as host. Interment will be at Parkview Cemetery. The family has entrusted T.W. Parks Colonial Chapel to handle the final arrangements. Online condolences for words of encouragement can be made at www.twparkschapel.com

The family of Willie Jenkins created this Life Tributes page to make it easy to share your memories.

Willie, &quot;Tractor Man&quot; Jenkins, 70, of Peoria passed away on Saturday,...

Send flowers to the Jenkins family.