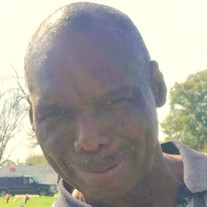 Willie Smith Jr., 63, of Peoria transitioned to his heavenly home at 4:30 p.m. on December 8, 2017, at OSF Saint Francis Medical Center. Willie was born on July 19, 1954, in Leland, MS to Willie Smith Sr. and Mattie Mae Smith. He spent his youth and teenage years with his mother in Leland, MS, where he graduated from Leland High School. He later moved to Peoria, where he spent the rest of his lifetime. Willie had a zest for life and enjoyed helping others, especially his children. He had a passion for painting, cooking and spending time with family and friends. He accepted Christ at an early age, and his charm and smile set enlightened any given moment. Willie leaves to cherish his most precious memories his mother Mattie Mae Smith of Leland, MS, two sons, Willie Anthony Carter of Peoria and Tejon Willie Webster of Peoria, two daughters, Briggett Carter and Shavon Carter of Peoria; three sisters: Doris (Kenneth) Chambers of Leland, MS. Lavonne Smith of Leland ,MS., Salinda (Cornelious) Wright of Denver, CO., and two grandchildren Evan Carruthers and Tamia Lafayette of Peoria and host of nieces, nephews, other relatives and friends who truly adored him. He is preceded in death by his daughter, Sonya Carter, father Willie Smith Sr. and two sisters Patrina Peterson and Beulah Gordon. Funeral services will be held on Saturday, December 16, 2017, at 4:00 p.m. at T.W. Parks Colonial Chapel with visitation commencing one-hour prior, Overseer Terry Holley, will officiate. Willie will be laid to rest at Lutheran Cemetery on Monday, December 18, 2017, at 10:00 a.m.

The family of Willie Smith Jr created this Life Tributes page to make it easy to share your memories.

Willie Smith Jr., 63, of Peoria transitioned to his heavenly...

Send flowers to the Smith family.