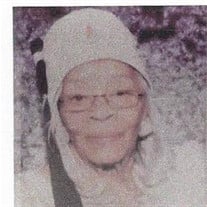 Zenobia Hatchett Slaughter Alexander (Zee), 88 of Peoria, IL died on Saturday July 11, 2015 in Iowa City, Iowa at the University of Iowa Hospitals and Clinics. Zenobia is survived by one child her son Lanné LaMarr Slaughter of Capital Heights, MD, three sisters Maragaree Hatchett Cooper of Little Rock, AR; Lela Hatchett Sills; Patricia Hatchett Mays of Fayetteville, AR; 8 Grandchildren and 15 Great Grandchildren. She is preceded in death by her sons Frank H. Slaughter, Jr. of Memphis, TN; Stephen E. Slaughter, Peoria, IL; her daughter Deborah F. Cotton, Los Angeles, CA; her husband Raymond Alexander, Peoria, IL; and two brothers. Zenobia was born on August 19, 1926 in Newport, AR to the late Gus Hatchett and Edwina Watson. After moving to Peoria Zenobia began working for Robert Hall Clothes as a Cashier/Bookkeeper where she worked for 28 years until the company closed. Zenobia, affectionately known as Ms. A., retired as a Manager from the Peoria Housing Authority after 20 years of service. Zenobia was a member of Zion Baptist Church for over 60 years. Zenobia was also a 50 year member of The Order of the Eastern Star Silver Star Chapter 74 which was a very important part of her life. She held various offices in the Peoria Chapter and the Illinois State Chapter. She cherished the friendships that she made while discharging her Eastern Star duties, and she thoroughly enjoyed her travels. She was particularly fond of working with the youth and opened her home to many foster children. A Memorial Service is scheduled for 12PM on August 15, 2015, at Zion Baptist Church in Peoria, with a reception to follow. All are welcome to attend and celebrate Ms. A’s life. Condolences can be sent to [email protected]

The family of Zenobia Alexander created this Life Tributes page to make it easy to share your memories.